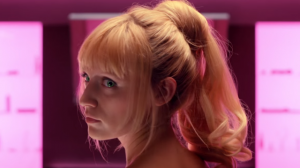 An attempted hack on a synth, an android chop shop and a fem bot takes matters into her own hands?Â  Wanna know more?Â  You know you do, so here’s what you need to know about last week’s Humans before tonights all new episode.

Let me first start off by saying NO Anita/Mia (Gemma Chan) did not kidnap young Sophie (Pixie Davies) like we were led to believe at the end of the first epsiode.Â  Though why she took her outside is still unknown.Â  What I can say is that I get the feeling Anita/Mia does care about Sophie and that she’ll make sure no harm ever comes to that child.Â  If only her mother Laura (Katherine Parkinson) could see things that way.Â  She fears Anita/Mia, though judging from how she was in the first epsiode, I think she dislikes all synth’s in general.Â  Her fear escalates and she decides Anita/Mia is damaged in some way and needs to be returned.Â  Laura’s older daughter Mattie (Lucy Carless) gets into trouble at school when she attempts to hack into a synth on the staff.Â  Though she didn’t succeed, she manages to avoid being kicked out thanks to her mom who argues there is no proof to support that Mattie was behind the attempt.Â  Mattie you are one lucky girl young lady, I’d keep my ass out of further trouble if I were you young lady!

Elsewhere Fred (Sope Dirisu) continues to be studied as Prof Edwin Hobb (Danny Webb) and company attempt to figure out why Fred and a handful of other synth’s are conscious.Â  They’ve uncovered what appears to be a memory of Fred’s and it’s an intriguing one that shows him swimming with a girl.Â  The girl happens to be Anita/Mia, but will they discover that she too is a synth?Â  Leo Elster (Colin Morgan) and his trusty synth Max (Ivanno Jeremiah) continue their search for Mia/Anita and their latest lead brings them to a synth chop shop where people bring in boosted synth’s to be reprogrammed and sold.Â  Lep gets his ass kicked, but Max comes to his rescue and the two escape.Â  Their synth friend Niska (Emily Berrington) falls into a depression like state as she continues to hold up at the brothel she was sold to.Â  Nobody likes to do the nasty unless they’re in the mood for it, robots included ok?Â  Well Niska is DONE waiting for Leo to break her out so she kills a client that gets too aggressive and then breaks herself out.Â  All I have to say is You Go Girl!

Dr. George Millican (William Hurt) couldn’t avoid the health service forever as the representative that dropped by last week returns with an upgraded synth to replace his outdated synth Odi (Will Tudor) who’s like a son to him and who he keeps hidden in the shed.Â  The upgrade is named Vera (Rebecca Front) and she’s an annoying pain in the ass who constantly checks up on you and will even get physical with you if she feels you are not complying.Â  Somebody get that man a shovel or a sledgehammer cuz I’ll be damned if some robo nurse is gonna put her hands on me!Â  Oh hell to the naw!!!Â  I’m curious to know what happens next and if you are too then you’ll be tuning in tonight to see the next chapter.Â  Humans airs at 9pm on AMC, checl your local listing for channel information.