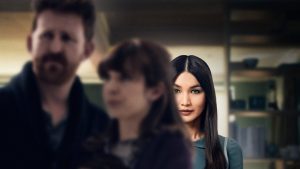 Did Laura really take Anita/Mia back to Persona Synthetics?Â  Will they find Niska after the body she left at the whore house?Â  And what’s been going on with Doctor Millican and Odi?Â  Here’s what you need to know about last week’s episode of Humans.

Laura Hawkins (Katherine Parkinson) was on her way to Persona Synthetics to return Anita/Mia (Gemma Chan) when her son Toby (Theo Stevenson) caught up with them to stop his mom.Â  He was nearly hit by a car, but Anita intervened and allowed herself to be struck instead.Â  Toby was saved and her actions further cemented her in good favor with the Hawkins family.Â  A kind gesture to Laura on Anita’s behalf shortens the gap between the two which may lead to harmony in the Hawkins household.Â  Let’s hope!Â  Mattie (Lucy Carless) decides to connect to Anita’s/Mia’s system to see what makes her different from the other synth’s.Â  When she connects it triggers something and Mia (not Anita) reaches out for help.Â  Mattie gets scared so she disconnects which sends Mia away and brings Anita back online.Â  I’m starting to understand it now and I’m sure you will too.Â  Mattie decides to post Anita’s/Mia’s base code online in a forum hoping someone will see it and have answers.

With the authoritues after her for the client she killed, Niska (Emily Berrington) is in the wind.Â  Thanks to some stolen goods she lifted from a shopper at the mall, Niska changes clothes and puts on contacts to look just like you and me and decides that the best thing for her is to hide in plain sight as a human.Â  She goes to a bar and is soon hit on by strapping young man who invites her back to his place.Â  Niska attempts to initiate sex, but gets confused when the man suggests they get to know one another a little first.Â  I suppose having spent her time at a whore house, Niska was simply going off routine.Â  Realizing he’s not like most men and has a daughter, she decides to leave at once and spare the man from false hopes.

Elsewhere Doctor George Millican (William Hurt) has had ENOUGH with his newly assigned synth Vera (Rebecca Front) and makes a run for it with his son like synth Odi (Will Tudor).Â  After the incident at the grocery store in the first episode, George was told by the authorities to bring Odi in to be recycled.Â  George couldn’t dream of allowing that to happen, so he decides to set him free instead, but afterwards is sick with worry about what will happen to Odi now that he’s in the woods all alone.Â  I wonder if Odi will be ok or if someone will find him and decide to take him to the scrap yard for money.Â  Tune in tonight for the next chapter and check your local listings for channel information.Â  Humans airs Sundays at 9pm on AMC.