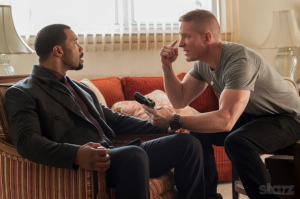 Will the red head turn into a snitch to keep her own ass out of trouble?Â  Will Tommy end up getting his bad boy goose cooked by the Fed’s?Â  Will Jamie/Ghost get swallowed up in the domino effect of problems that have simultaneously fallen into his lap?Â  Here’s what you need to know before tonight’s all new episode of Power.

Angela (Lela Loren) is closing in on proving Tommy (Joseph Sikora) is connected to the murder of her C.I. Nomar along with the more recent murders of QDubs and his men.Â  With Holly (Lucy Walters) being brought in, Angie hopes to turn her into an asset to flip on Tommy and finally prove he’s a bad guy.Â  The Fed’s are threatening to issue an arrest warrant from when she was 22 (she was a bad girl growing up) against her if she doesn’t assist them with their investigation.Â  Despite their threats, Holly puts up a strong front and manages to hold her own without giving anything up.Â  As they dig deeper they discover that Holly was the woman that was shot at Truth and they know Tommy wasn’t with her at the hospital.Â  With that intel they decide to use it in hopes of catching her in a lie so that they can pressure her into giving up Tommy.Â  I applaud them for their full court press because they tried their best to shake it out of her.Â  They had her scared until Angela’s dumb ass questioned Holly in the bathroom about “Ghost.”Â  Baby girl had her world flipped UP THE FUCK SIDE DOWN when she learned from Holly that Jamie (the man that she loves) and Ghost (thr big time dealer she’s after) are the same person.Â  What you gonna do now mama cuz you’re the one that’s been sleeping with the enemy.Â  What’s worse?Â  Knox came by to speak to her and happened to see the two of them together and now knows that they’re sleeping with each other.

Elsewhere Ghost/Jamie (Omari Hardwick) is still feeling the sting from his wife Tasha (Naturi Naughton) kicking him out their home, but now she’s not even accepting his calls which makes him miss home even more.Â  To throw insult on top of injury, Jamie/Ghost comes across an article from the New York Post about Simon Stern (Victor Garber) which makes it seem like Stern is the reason that club Truth is a bigger success and not because of the hard work that Jamie/Ghost has put in.Â  He’s close to uncovering that Stern has been secretly working against him to keep him from buying Truth back.Â  But wait there’s more!Â  Agent Greg Knox (Andy Bean) pays Jamie/Ghost a visit at Truth asking about Tommy in hopes of finding out something to connect the dots.Â  If that ain’t enough, the connect that Jamie/Ghost uses to get his drugs calls to inform him that he’s moved up his trip to the US and with that he’ll need his money sooner as well.Â  WTF?!!!Â  It seems like everything is happening all at once and if Jamie/Ghost doesn’t find a way to get all areas situated he’s gonna drown.Â  Truth be told I’m not worried about him because if anything he’s resourceful and always manages to find a way to make it out on top.Â  When you see the plan he executes to get that money yous are gonna go YES MOFO!Â  LMFAO!Â  Tune in tonight for the next drama filled juicy chapter and check your local listings for channel information.Â  Power airs Saturdays at 9pm on Starz.