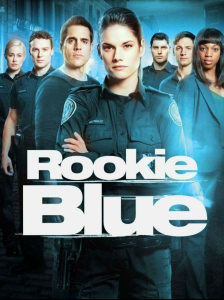 Precinct 15 is BACK on duty as the officers of the cop drama Rookie Blue return for the show’s season 6 premiere.Â  Last we saw them they were recovering from an explosion that went off inside the precinctÂ during the season 5 finale.Â  Thankfully no one was badly injured including Officer Andy McNally who was inside the evidence room where the blast went off.Â  Last week on the season premiere we find McNally (Missy Peregrym) and boyfriend Detective Sam Swarek (Ben Bass) enjoying secluded bliss as they’ve been at a fishing cabin for 3 weeks enjoying the time off they were given after the bombing.Â  Alas all good things come to an end and it’s back to work so the happy couple return and reunite with their colleges at The Penny (the local cop bar they all frequent).

Upon departing NcNally heads over to her gal Detective Traci Nash’s (Enuka Okuma) place to get a breather before resuming the normal routine while Nash is off to dinner with her boyfriend from the Guns and Gangs unit, Detective Steve Peck (Adam MacDonald).Â  Andy gets ready to relax when Sam calls her and just as he’s about to tell her that his ex, Intelligence Detective Marlo Cruz (Rachael Ancheril) is pregant with his child, Andy gets attacked by an intruder.Â  BIG mistake because he picked the WRONG girl to mess with as Andy fights him off, but he douche manages to get away.Â  As the investigation gets underway, it seems that the break in wasn’t random and that Traci was the intended victim.

As they start combing through her life to try and figure out who may have been responsible, they come across a barista at the coffee shop Nash frequents.Â  Though they were looking at the wrong guy, he does point them in the right direction as he remembers a strange man he noticed watching Nash.Â  The man they’re looking for turns out to be on the Sex Crimes unit’s radar, but precinct 15 is worried that enough isn’t being done so they take matters into their own hands.Â  The plan proves fruitful when they discover he sends flowers prior to his attacks which allows the team to locate the next intended victim.

They set up shop to wait and soon after a man attempts to scale the building, but precinct 15 is ready and pounces only to discover the man they apprehended is not the man they’re after.Â  The operation is blown and in the process alerts the man they’re after who is now in the wind.Â  A second bomb is dropped as Officer Chris Diaz (Travis Milne) learns that his married lover is the wife of the Inspector that Diaz’s boss reports to.Â  Tune in tonight at for an all new episode of Rookie Blue which airs Thursdays at 10pm on ABC, check your local listings for channel information.