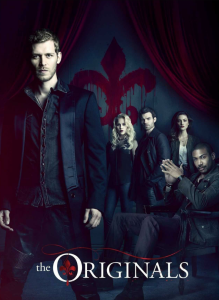 KABOOM!Â  So Elijah blows up his home away from home to prevent older brother Finn from getting younger brother Klaus’ daughter Hope (who’s life they’ve managed to keep a secret since her birth during the season finale last summer).Â  Did I mention both Elijah and Finn were in the house when he blew it up?Â  Not to worry, Elijah is a vampire after all and survived the explosion.Â  Not so good for Finn who’s soul/essence was placed into a human body.Â  Or so we thought as eldest sibling Freya (long thought to have died 1000 years ago before the Mikelson family ever became vampires hence the show being called The Originals, who is also back from the proverbial grave) used witchcraft to heal Finn’s human body and bring him back to life.Â  She warns Finn that their long dead aunt Dahlia is drawn to magic and that she, who was a more superior witch than their mother Esther, will be coming.

Can we talk about that wedding?Â  Wasn’t it just BEAUTIFUL?!!!!!Â  For me it wasn’t so much the decorations or the details that I found beautiful, but how the wedding proceeded.Â  I LOVED how the bride (Hayley) walked in, then the groom (Jackson) walked in and upto his bride to be.Â  They walked hand in hand up the aisle before separating as they climbed separate parallel staircases before meeting back up at the top where the person presiding over the wedding was waiting.Â  I WANT that aspect in my wedding should I ever be fortunate enough to get married.

Cole, the baby brother of the Mikelson clan, is probably the one fairing the least of all his siblings.Â  Because Finn magically trapped Cole’s soul/essence in his current body and condemning him to die, he’s unable to take on another host body and is deteriorating rapidly.Â  He enlist sister Rebecca (who’s still in another body thanks to a prank by Cole) for a magical assist but their attempt proves uneventful.Â  Rebecca gets Klaus and Elijah who are with her and young witch Davina (who he had justed to have a relationship) during Cole’s final moments.Â  The Originals returns with new epsiodes on Monday March 9th.