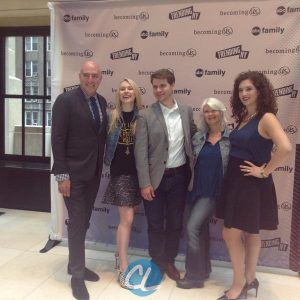 â€œDonâ€™t judge a book by its cover.â€ Itâ€™s a phrase we often use, but donâ€™t live by. Many are judged by appearance, disabilities and anything else that society thinks is weird. What would life be if we were all the same? Take a moment to thinkâ€¦

The recent headlines of Jazz Jennings and Caitlyn Jenner has shed light on the LGBT community, mostly transgender. It is a topic that is often shunned or ridicule due to religious views, biased opinions etc. ABC Family has taking the route of documenting stories similar to Jazz and Caitlyn with an unscripted show called Becoming Us. This show follows the Lehwald-Crawford family from Evanston, Illinois as they deal with recent changes in the family. Becoming Us consist of Suzy (mother), Ben (son), Sutton (daughter) and Charlie aka Carly (transgender father). Not to mention Benâ€™s girlfriend Danielle and her transgender father Sallydan. The show is told through the eyes of their 17 year-old son Ben. He is an average kid trying to live a normal life, while dealing with family and school issues. He has a small group of friends, a girlfriend and a love for photography. At such a young age, he has enough on his plate as a bully victim and failing grades.

Despite the show mostly focusing on Ben, it shows multiple views of all family members and coping with everyday struggles. The relationship that Suzy and Charlie aka Carly once had is nonexistent. Suzy is still dealing with the transition of Carly and co-parenting. Sutton lives on the East coast and is in the midst of planning a wedding. She is uncertain of Carly walking her down the aisle due to lack of a relationship. Danielle lives with her father whoâ€™s been transitioning since she was about 5 years old. Her father has uncertainty with some parts of his transition and is not as comfortable as Carly. She seeks help from Carly for bra shopping and other advice. As the Lehwald-Crawford family embarks on this journey, they face many challenges along the way. Why watch Becoming Us? If you want to see more of this unique story and watch a real reality show, tune in on Monday, June 8 at 9 pm on ABC Family.

*Sutton Crawford (Becoming Us) did a Q & A after the screening and discussed life after filming.

Images from the event: