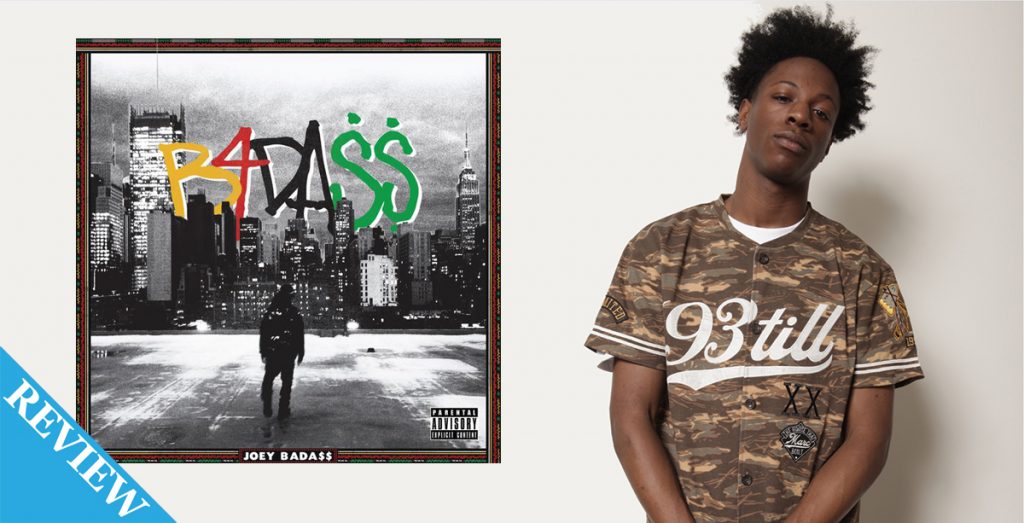 I have to admit that the name Joey Bada$$ to me was just a name thrown around and I really never paid it any mind. But a good friend of mine who’s knowledge of what I believe Hiphop is posts about this new Joey Bada$$ album “B4DA$$”. So he said it was like 90’s real hiphop which was all I needed to hear about an album.

I quickly went on my spotify account and saved the album as an offline playlist and started listening. Aside from what my friend had said, I came into this review with really no knowledge of who Joey Bada$$ is so there is no preconceived notions of what this album should sound like or on comparison of what his lyrics should be.

For more than a few years, New York hiphop has been in a downward spiral trying to piggyback off of the current music brought out by other parts of the country. The birthplace of Hiphop has been sent to the back of the line and that’s where we sit. Aside from the main stream artists like Jay Z, 50 Cent and the like, New York has been fairly quiet. (I don’t want to hear about all these “artists” popping but are doing all this trap stuff)

Enter brooklyn rapper Joey Bada$$. An artist that seems to have been born and raised listening to the likes of Black Moon, Nas, Tribe Called Quest and Busta Rhymes. And that to me is Joey Bada$$ is one phrase. If the bootcamp click, the Native Tongues, outkast and the Roots donated DNA – Joey would be that outcome.

I am finally excited about a new artist coming out of NY.

In this first full studio debut album, Joey Bada$$ delivers truly quality lyrics, beats and a complete musical package. The 17 track album gives the listener a solid hour and 2 minutes of music to help you zone out and head nod.Â  When Common rapped “But she was there for me, and I was there for her | Pull out a chair for her, turn on the air for her | and just cool out, cool out and listen to her”. This is exactly what he was talking about.

Released on January 20, 2015 via Cinematic Music Group / Pro Era, the album contains features from BJ The Chicago Kid, Chronixx, Action Bronson and Kiesza among others. For being in his 20’s Joey Bada$$ shows a very mature nature in his ryhmes focusing on an undertone of progression.

So if you want to take this time machine ride back to the early 90’s where Lyrics mattered and NY Hiphop reigned supreme then you NEED to listen to this album.

Tracklisting (My Standouts are bolded)