For those unfamiliar with r&b singer/songwriter K. Michelle, she is a reality star who shot to fame after being a cast member on VH1’s Love & Hip Hop: Atlanta.Â  She was funny and talented with personality to boot.Â  Never shy about speaking her mind about whatever or whoever is why fans (myself included) took to her.Â  She wasn’t just the average chick getting a check for letting cameras follow her every move, she had talent as well as a story to tell.

While on LHH: Atlanta she released her debut album Rebellious Soul (which debuted at #2 on the Billboard 200 chart and #1 on the R&B chart).Â  After the second season,Â  K. Michelle moved to New Jersey and joined the New York cast of the original Love & Hip Hop.Â  After just one season (the shows fourth) she decided to leave the Love & Hip Hop family altogether.Â  K. Michelle recently finished the first season of her own reality show (K. Michelle – My Life) and on December 9th released her sophomore album Anybody wanna buy a heart?

Having onlyÂ two albums out I think with her second go around she’s grown and gotten even better, sounding like a confident woman in control of her career.Â  The album has that feel good r&b vibe like the kind I grew up with in the 90’s.Â  The album is mixed with ballads that’ll make you think (like How do you know? and Miss you, goodbye) along with tracks you’ll want to shimmy and dance to (like Going Under, Something about the night, God I get it).Â  Every song has the potential to be a single, but I’ll just highlight 6 tracks otherwise this will look more like a term paper instead of a review.

I like the theme of Judge Me especially the line “judge me, judge me all you want.Â  I’m only human and I’m perfectly flawed” because K. Michelle admits she isn’t perfect and it’s something MANY people need to accept and embrace in life.Â  We ALL want to please somebody (parents, kids, bosses, significant others) but at the end of the day we can’t please everyone because we are in fact only human.Â  A great life motto to live by. 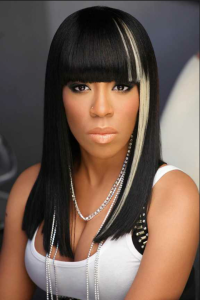 Within the chorus of Love ‘Em All is the line “I need another one to get over the other one.”Â  What K. Michelle is referring to are men.Â  It’s her outside the box, stereotype breaking songs that allow K. Michelle to stand out from other singers.Â  What woman (aside from a lady of the night) is going to WILLINGLY admit she gets over men with another men ESPECIALLY with the double standard there is on women when it comes to sex?Â  Bold statement and BRAVO K. Michelle!

Cry showcases a woman TIRED of being hurt and taking a stand against the man who’s done her wrong.Â  With lines like “Ima let him kiss my body, touch my body, record it and make sure you find it” and “you goin’ suffer, you goin’ suffer for everything you did” it really could be part 2 the Mary J. Blige classic Not goin’ cry (I would LOVE to hear a remix duet of Cry with Mary!).Â  It’s empowering hearing a woman say she’s had enough and tell a man it’s time he paid for what he did to her.Â  I HOPE this gets released as a single because I’m sure PLENTY of women (and some men) will relate to the song.

The sexy Hard to do finds K. Michelle
apologizing to her man after a fight and informimg him that she’d rather be making love instead of missing him.Â  With lines like “Whatcha goin’ do when I put that pretty thing on you?Â  Oh I usually don’t do this but I’ll do it for you” something tells me this song will be on MANY bedroom playlists (mines included LMFAO).

Maybe I should call talks about being stuck on an ex you’re still in love with who’s made a life with someone else. Interestingly enough the ex in question (and the inspiration for much of this album from what K. Michelle claims) is actor Idris Elba (who also directed her Rebellious Soul musical which aired on VH1 this past summer).Â  Lines like “She’s having the child I should’ve carried.Â  I’ll be dammed if yawl get married” and “will you ever let her go? I don’t know.Â  Will I ever be first? I hope” certainly show just how into Elba she is (can anyone blame her?Â  He’s handsome, debonair and famous!).

Wouldn’t life (and love) be so much EASIER if we had the option of putting together the perfect mate instead of going through the trials and tribulations of heartbreak?Â  K. Michelle certainly thinks so and on Build a man she daydreams of that.Â  I love when she says “I wish it was as simple as a build a bear assembly.Â  I’d have the necessary parts, he’d be customer friendly.Â  And smoke a lil weed.Â  Corporate but still a lil street.”Â  Kudos to K. Michelle for the piano driven Build a man intro on which she mentions her ex’s and taking the best part them to combine them into her dream man.

Drake would love me just might be the most flattering tribute to a celebrity in terms of a song especially when the song is written and recorded by another celebrity.Â  Though you would think she was in love with the Toronto born rapper (K. Michelle insist their relationship is platonic) she wrote the song from a fan perspective after meeting and speaking to many of his fans.Â  The result?Â  A beautiful ballad painting Drake as the caring, loving and ideal man every woman dreams of having.Â  Whether or not Drake lives up to this song is anyone’s guess.Â  I’ve had the good fortune of meeting the superstar twice and I can tell you that he’s so HUMBLE and chill and very GIVING to his fans and APPRECIATIVE of ALL the love they give him.

Anybody wanna buy a heart? is online and instores everywhere now and Best Buy is carrying an exclusive version with two bonus songs (Silhouettes and Get in my bed).Â  Be sure to pick up her debut album Rebellious Soul to hear the musical growth K. Michelle has made.Â  Best Buy also has an exclusive version of that album with three bonus songs (Better than nothing, The right one and Same Man).Â  Be advised, K. Michelle’s music as just as colorful as her personality so if your kids are fans of r&b make SURE you get the the censored versions, otherwise your kids will hear cursing.