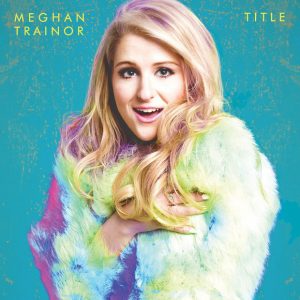 There is sinply no denying the inescapably infectious charm that Meghan Trainor possesses.Â  Her debut single, All about that bass, was released in 2014 and reached #1 on the Hot 100 chart.Â  The song recieved two grammy award nominations, Record of the year and Song of the year.Â  Her follow up single Lips are movin’ reached the top five on the Hot 100 chart.Â  So it’s safe to say that Meghan is riding high on a wave of success.Â  2015 is so far proving equally successful (if not more) when her debut album Title, released on January 13th, debuted at #1 on the Billboard 200 chart.Â  She’s a talented singer/songwriter (she wrote every song on her album), has a pretty tone to her voice (it’s sweet and inviting) and even raps (and she ain’t bad at it either).

Title offers messages of love, self empowerment and even some advice for men all wrapped up in cute jingles, pretty ballads and rump shaking uptempos.Â  She has an old school sound (the musical hairspray always comes to my mind) and yet Meghan Trainor has somehow managed to take that sound, infused it with a freshness that allows her music to come off sounding current and new.Â  I could talk about each track and go on about how great they ALL are, but even I don’t like to write that much (LOL) so I’ll highlight just a few of the many standouts.

Dear future husband
———————————–
“Take me on a date.Â  I deserve it babe.Â  And don’t forget the flowers every anniversary”
“If you wanna get that special loving, tell me I’m beautiful each and every night”
“You’ve gotta know how to treat me like a lady.Â  Even when I’m acting crazy.Â  Tell me everything is alright.”

Snippets of the letter of advice to whomever it is that steps to the plate to ask for your hand in marriage.Â  It’s clear Meghan knows what women want and isn’t afraid to express that to the women of the world informing them on the realistic things they should want and come to expect from a spouse.Â  I don’t know if she’s ever been married but MAN whoever pops that question had best to be on point with his!

Close your eyes
————————-
We live in a society where too many people allow Hollywood and fashion to dictate what is “acceptable” in the world and anything not fitting that mold is wrong and unworthy.

“Show the world the you inside.Â  Raise your voice and close your eyes.Â  Cause you’re beautiful.”

With just that simple line Trainor is looking to change the world’s perception by letting you know it’s okay to be different and to celebrate your individuality.Â  With a message like that, Meghan is sure to touch and inspire fans the world over.Â  This song, if released as a single, could very well have the same impact for her that Katy Perry had with her song Fireworks.

Like I’m going to lose you
——————————————
We live, we die and in between that we try to make something of ourselves so that when we go our lives might have had some meaning.Â  Tomorrow is never promised and what Meghan advises is that you love who you’re with as if you’re about to lose them.

When you listen to lyrics like “I’m gonna hold you like I’m saying goodbye.Â  Wherever we’re standing.Â  I won’t take you for granted” and “So I’ll kiss you longer baby.Â  Any chance that I get.Â  I’ll make the most of the minutes and love with no regrets” you get a sense that Meghan understands how truly precious life is.Â  This song demonstrates not only her artistry, but also just how magnificent a songwriter Trainor really is.Â  As an added bonus multi grammy award winner John Legend is her duet partner on the song.

On this particular track Meghan’s rapping talent takes center stage showing her versatility as an artist.Â  With it’s beat heavy, hip gyrating sound and Trainor’s slick rhymes aided by an infectious chorus, she’s definitely bringing the party and wants you to get your ass up and shake what your momma gave ya!

After just one listen the movie Drumline came to mind.Â  I could see the video for this song taking place on a college campus football field where the school’s band is giving a performance during halftime and right smack in the middle is Trainor (dressed as thr head cheerleader) leading the band.Â  If Meghan hasn’t thought of this idea already, she’s MORE than welcome to use it, just give me credit for the concept and fly me out to the video shoot so I can watch the magic happen.Â  Thanks in advance! 😉

No good for you
—————————
When your friend is involved with someone who isn’t good for them, what do you do?Â  Any good/great friend would tell them.Â  The problem is that most often the person, blinded by what they want, will turn on their friends and accuse them of being jealous.Â  I’ve seen it in movies, on tv and in the real world with my own eyes.

The next time you find yourself in the same predicament, sit them down and play this song because when someone tells you “He drives those fancy cars that you like.Â  But he doesn’t call you at night and tells you he loves you.Â  And he’s thinking of you” then there’s clearly a problem with that relationship.Â  This song can convey the message you’re trying to get across.Â  If it works and the song connects with them, they’ll understand and wake up from the love fog they’ve been stuck in.Â  If not you may possibly lose a friend, but you’ll atleast get to listen to 3:37 minutes of a really good song.

Credit
———–
After a breakup have you ever thought about who your ex is now and who they used to be when you first met.Â  You come to realize that they are who they are because they became a better version of themselves because of you.Â  Meghan is all too familiar with the case and wrote a song about it.

“He holds her hand at the movies.Â  Never stares at other boobies.Â  I bet she thinks he’s the one.Â  She should be thanking me and sending me some flowers.Â  I taught him everything.Â  Now he can last for hours (yeah).Â  She’ll never know.”Â  Well I be damned is all I have to say on that!

Overall BRAVO to Miss Meghan Trainor for her debut album.Â  Title is one of those RARE musical gems that comes along but once in a while that’s strong from the start and never let’s up, entertaining you all the way through.Â  I swear I never contemplated skipping a single track not even once.Â  Meghan Trainor will join artist like Pink, Carrie Underwood, JayZ, Katy Perry, John Legend, Lady Gaga and Drake as the latest member of the great singer/songwriter club.

Her words are going to connect with many people and her fan base will only continue to grow.Â  2016 I think ALL eyes will be on Meghan Trainor because I have a feeling she will be the darling of next year’s Grammy’s.Â  Title is avaliable in a standard version as well as a deluxe edition which has four extras tracks: No good for you, Mr. Almost, My Selfish Heart and Credit.