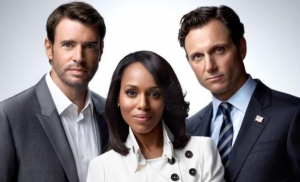 So Papa Pope is back huh?Â  Rowan Pope (Joe Morton) has returned and in his daughter’s home of all places.Â  He was waiting for Olivia (Kerry Washington) to get home so that he can inform her that he’s aware of the case being put together in an effort to take him down once and for all.Â  Now why did anyone think they could make any of this happen without Rowan getting wind of things?Â  By now we ALL know that whenever something involves Papa Pope he WILL find out before he’s supposed to and retaliate with an unwavering vengeance.Â  Will Liv find a way to shut her people down or will she risk their lives (and hers) in the process?Â  She’s a gladiator dammit so what the hell do you think?Â  WAR BABY!!!!!!

If that isn’t already enough on her plate, Pope & Associates take on a new client who calls them to a murder scene (which he’s still sitting in when they arrive).Â  What really happened and what does this all have to do with the mayor?Â  Their client was apparently having an affair with the mayor’s wife.Â Â  Tsk tsk tsk now what the hell was he thinking?!!!! Sometimes the forbidden fruit is the best kind though!Â  LMFAO.Â  But WAIT until Liv pops up at the precinct after hearing her client was taken into custody!Â  I NEED her on retainer because God FORBID if I’m EVER arrested I need that pitbull in a skirt with that bark and bite going to bat for me!Â  If you think you know how it all ends just wait!

Elsewhere President Fitzgerald “Fitz” Grant (Tony Goldwyn) is a man on a mission intent on getting a new bill (The Brandon Bill) passed.Â  The passing is all but in the bag until the votes come down to a tie.Â  The deciding vote is left in the hands of the newly elected Vice President Susan Ross (Artemis Pebdani).Â  Ross refuses to cast her vote until she has read the bill and fully understands it before making her decision.Â  Will the Vice President back the President or will his hard-work and effort go up in smoke?Â  The answer will surprise you, but you’ll sweat before you get it.Â  Make sure you catch up because an all new episode of Scandal airs this Thursday at 9pm on ABC.