The simple thought of having Morgan Freeman, Michael Caine and Alan Arkin together rings bells beyond anyone’s comprehension. All super talented, Oscar-winning actors who have been around for a while, and show no sign of stopping. Can you just image what it would be like to have them all in one film? Quite frankly, there aren’t enough thoughts and/or words to describe the feeling. That, my friends, is a thought full of enthusiasm.

GOING IN STYLE presents a trio unlike any other. There’s only so much a man can take before he must do something about it – and sometimes in ways not a soul can imagine. Willie (Freeman), Joe (Caine) and Al (Arkin) are three upstanding, kind-hearted NYers who have a friendship that dates way back to the assembly line at Semtech Steel. A company they were very proud of, but never thought would fumble their pensions and allow it to become just another corporate casualty. Upset about being screwed, to come through for their loved ones, pay bills, and continue to have somewhat of a normal life, Willie, Joe and Al have nothing left to lose. Taking it up notch, they decide to take a walk on the wild side by plotting to knock off the same bank that played with their livelihoods.

The concept of these “gentle geezers” attempting to pull off a bank robbery is not feasible; however, the movie comes off well and shows what friendship really means in more ways than one. It starts off a little slow, but picks up. With a little adventure, drama, and lots of comedy, GOING IN STYLE’s lifeline is its leads (of course), which also include fantastic supporters Oscar nominee Ann Margret and John Ortiz.

The film as a whole holds its own. However, the magic it portrays isn’t as magical as it is to have had the privilege to share them in person along with Ann Margret, John Ortiz, Christopher Lloyd and producer Donald DeLine at a recent NYC press conference. Serious when they want to be, silliness seemed to be the name of the game as they sat with us and shared thoughts regarding their experiences with the film, their lives, how it translates to modern times, and kinda “taken back” (a little) with the concept of “ageism” and how unconnected we are during modern times.

“He promised to pay us,” says Freeman, when the kickoff started courtesy of producer Donald DeLine as he elaborates on how the film started. But of course, it’s more than just money. With a clever story and layout, GOING IN STYLE presents more than one imagines. So much, after watching it, it made me wonder how much of it was scripted and/or improvised. The art of acting exposed by its leads is second-to-none – even when it comes off as simple and subtle as three men chatting over dinner. “There was no improvisation,” says Arkin. “We’re too lazy to improvise. We stuck to the script,” is followed by Caine. “As actors, you have to be prepared” is made clear by Freeman.

As the rest of the press conference unfolded, its main objective was simply getting the most of three icons (along with the rest of the talent) by picking their brains. As a whole, it was fun. Even that awkward moment when timing was off and Morgan Freeman “calls me out” for texting. Ha! How’s that, ladies and gentleman? I was “called out” by Morgan Freeman. There’s my “claim to fame.”

As usual, rawdio is provided for your enjoyment and interest to dig deeper within the film’s cast, story, and more. 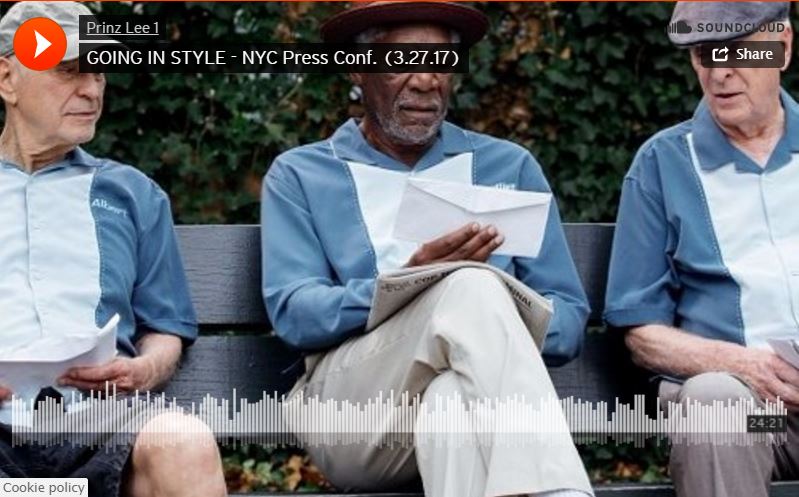 GOING IN STYLE – In Theaters April 07!