"Secrets and Lies: Recap Season. 1 Episodes #1 The Trail and #2 The Father" 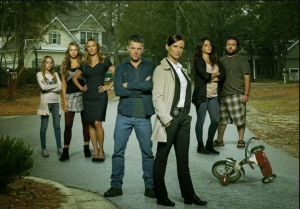 A young boy has been murdered and the horror of the crime rips through a tight knit community.Â  Who could have done such a thing?Â  Why kill an innocent child?Â  Those are the questions raised on ABC’s newest series, a drama murder mystery titled Secrets and Lies.Â  As the investigation begins it seems the lead detective (Andrea Cornell) has a suspect in mind, Ben Crawford, the very same man who discovered the body while out jogging.Â  Before long many of his neighbors seem to think he too committed the crime and distance themselves from him.Â  What reasons would Detective Cornell, much less Crawford’s neighbors, have to think he was behind the murder?

Ryan Phillippe as Ben was convincing and what was interesting to see was his character switched back and forth from innocent looking man to being a possible suspect.Â  At one point you believe he’s innocent and hope he gets proven to be a good guy, then something is said or done that makes you think “this S.O.B. killed that little boy didn’t he?”Â  As Detective Andrea Cornell I HATED Juliette Lewis, but that’s a good thing because when an actor/actress makes you hate them they are doing their job and quite well.Â  Her Cornell is like a dog with a bone, fixated on Ben and convinced she found the killer and deadset on proving it.Â  As you watch her facial expressions and the way she says the things she says or how she continues to harass Ben, it makes you wonder WHAT is up with this chick that she’s acting the way she is.Â  She seems to have an axe to grind but why is Ben her focus?Â  Is their some sort history between them that we’re not aware of?

The first hour starts off intense with Ben running from the woods and through the neighborhood yelling for help and ends with a jaw dropping reveal from Detective Cornell.Â  The second hour drops another bomb not even three minutes into the episode (by the mother of the slain child no less) and closes with a frightening ending that will leave viewers asking themselves is Ben really the killer or did the real killer just reveal themselves?Â  I thought over the series premiere was pretty good and set up enough things for me to want to tune in as each week gets closer and closer to revealing the truth.Â  I’m guessing from the title that it’s not just Been Crawford who has something to hide and I’m curious to see which neighbors are keeping secrets, which ones are telling lies and which are doing both.
Questions I’m sure will get answers to throughout the coarse of the season.Â  Until then I recommend this show and advise you to tune in and find out what ate the secrets being kept and the lies being told.Â  Secrets and Lies airs Sunday nights at 9pm on ABC.