Mankind: The Root of All Evil

A CURE FOR WELLNESS exposes moviegoers once again to visionary, Academy Award® winning director, Gore Verbiniski. The master mindnipulator behind THE RING returns with a bone-chilling and mind-boggling psychological thriller, starring Dane DeHann as Lockhart, a well-rounded, successful Wall Street executive sent by the board of the firm he works for to a desolate, remote Swiss alp “wellness center” to retrieve the company’s CEO, who has no intention of returning to NYC. Upon arriving, he soon suspects that the spa’s miraculous treatments are not what they seem. When he begins to unravel its terrifying secrets, his sanity is tested, as he finds himself diagnosed with the same curious illness that keeps all the guests there longing for “the cure.”

At a run that goes well over two hours, the slow-burn film holds up for layered twists and turns into an abyss of malicious intent. It’s a deep, dark psychological thriller that aims at playing outside of usual color-by-number rules, but in some ways obvious it also aims at keeping three-piece suits appeased. It’s a gorgeous-looking, atmospheric picture that rides your psyche like a sinister seesaw. With about three quarters of it being suspense-driven, the remaining quarter is heavily invested in dialog that helps piece together a puzzle of hidden horrors.

Personally, the most appealing to me is how it cynically plays with lots of harsh phobias known to mankind, while also subliminally luring the audience (to an extent) in as patients running around the asylum. Not a flick for everyone, but everyone should be considering this flick. (If you’re into mind-bending horrors, of course!)

At a recent roundtable interview with some of my peers, lots of questions were asked about this vile tale of horrors. “He sadistically created those intentionally,” says Jason Isaac when chatter comes up about all the misery characters are exposed to throughout the film. “My month of torture,” is followed by Dane DeHaan as he touches up on his true life mental and physical tortures that although choreographed well for the screen, still provided some fear, especially when one of those scenes resulted in Dane getting hurt.

“It’s called A Cure for Wellness,” says Verbinski. “We are hard wired for certain things,” he continues as chatter regarding all phobias came up that are put to the test upon characters and the audience’s psyche. The overall scope of the story and location results in, “The place having that kind of darkness.”

One of the heartbeats of the film are its leads. Jason Isaac speaks for itself, as does Dane DeHaan, whose intense demeanor simply is “looking at acting as just doing things.” Now Mia Goth, a beautiful, talented, fairly “newcomer” stole the afternoon when saying she takes her work home. When asked why, simple – “The more you do offset, the less you do onset.” (Mic drop!) As usual. Like all these interesting interviews, the overall layout was fun, interesting, educational, and most importantly immersive, especially with a film like CURE, where many questions arise once you’ve seek’d out your own cure.

Rawdio is provided for your inquiring minds if interested in listening to it in full. I totally recommend it. My “muscle’d” questions come in at 10:40 and 26:09. They generate reactions! Endure the WELLNESS roundtable… 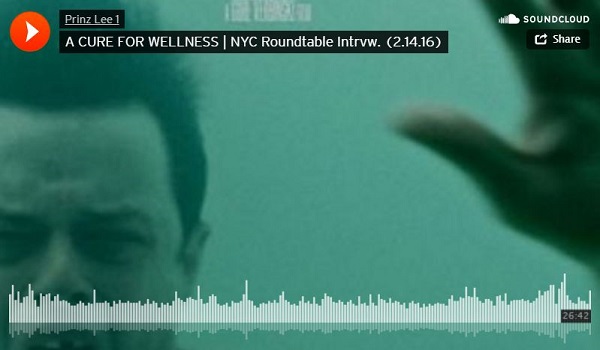