When the first trailer hit for Bay’s 2007 “TransFormers” movie, I recall an uneasy feeling. I wasn’t sure what we were about to embark on. The trailer looked cool, but then again like so many others, only to flatline once showtime hits. The TF franchise is near-and-dear to my heart. It was one of many animated, comic-books and toy franchises that defined growing up in the ‘80s. If it needed to be done, it had to be done right. Up until Bay’s TF flick, the best thing in terms of a feature was 1987’s “Transformers: The Movie.” For its time, it was solid and straightforward. Seriously, twenty minutes into the film and carnage ensued. They even killed Optimus Prime! From that moment on, things weren’t the same in that particular world. I was floored and swept away with anything and everything that came from the first moment I laid eyes on that franchise and so on. So, as a fan, I wanted Bay’s TF to handle the product with care. The rest… Well, it’s history. Much respect to it, because it was financially successful (so what?!), and no matter how horrible, it piqued interest. And much respect to those who liked it as well, but for me – among many other G1 old-schoolers I know – it was a harsh, swift kick in the chandeliers with a steel-tip boot. What a violation of my (and many others’) childhood.

Following five movies that played out like a cinematic version of an epileptic seizure, we may finally have a G1-like story that can set the pace. Seconds into the “Bumblebee’s” opening and It becomes apparent Travis Knight (director) paid homage to everything G1 fans of the franchise – me included – have dreamed about for the last few years. Nostalgia would be an understatement! It’s an intro with lots of familiar characters in original form and original sound and as that opener settled… REDEMPTION ACCOMPLISHED! And not just for me, but a lot of folks I screened it with. Let’s just say… people started applauding! I’m serious!

Anyway, as the film begins, the audience gets their first glimpse of the Bumblebee (voiced by Dylan O’Brien) of Cyberton. Known as B-127, the bright yellow transformer is a fierce warrior who has fought in a centuries-long conflict between the Autobots and the Decepticons. When all seems lost for the Autobots, B-127 is dispatched to Earth with a mission: Protect the planet and its inhabitants in the hope of establishing refuge for his comrades. His arrival is complicated when two Decepticons, Shatter (voiced by Angela Bassett) and Dropkick (voiced by Justin Theroux), follow him and launch an attack that endangers Earth’s inhabitants, and an American military team decides, understandably, that the alien species is a threat to mankind. Bumblebee attempts to hide from his pursuers disguised as a rusty, old yellow Volkswagen Beetle, but when a teenage girl named Charlie (Hailee Steinfeld) decides to restore the vehicle, she inadvertently discovers his true identity and complexities that follow along with it.

First and foremost, this is Bumblebee’s origin story. Since the movie predates the Bay chronology (yea, his touches are still around as one of the producers), the story takes a deeper dive into the character, giving the audience even more reason to fall in love with him. Which is one of the things that stands out nicely paced and detailed. It’s a simple and subtle plot to follow. Writer Christina Hodson doesn’t throw a bunch of wild, robotic ideas into a pot, stir it up and just start plastering things anywhere she please. There’s somewhat of an arc we get to see with Bumblebee, who for lack of a better term, is the star of the movie. As we see and learn more of Bumblebee, it is a lot of fun to watch and listen to the narrative run on an ‘80s kick, at one point even giving a nod to its animated feature. (I won’t give it away!)

Quite frankly, it’s a movie that uses a formula you’ve all seen before, I’m pretty sure. There aren’t any real surprises and you can’t go in expecting anything ground-breaking. But that’s good, because the movie isn’t aiming to throw out something brand new, just something familiar, but skillfully executed. To a degree, getting rid of Michael Bay was the greatest thing ever to happen to this franchise. Again, he’s down as one of the producers, but I’m sure that’s just a bone Paramount has thrown to keep him happy. That’s a whole other topic!

The relationship between Hailee Steinfeld & Bumblebee has its charm and the scenes showing Bumblebee adjusting to the environment are fun, funny and great! The action scenes and fight sequences are dope! Not only are they entertaining, but simple to follow. You know who’s who. By far, for me, the best parts of “Bumblebee” are nostalgic references. Watching those originals on screen gave me the chills. I will say there were a lot of G1 originals who were missing and would have loved to have seen in the mix, but I have hope after this one, we may get to see more. On a gripe note, the only thing is John Cena doesn’t add anything special to the movie. His character is way too dramatic and only used for his huge figure and loud shouting. That’s it. I’ve seen him do better work. I also felt the family dynamic between Charlie and her parents and brother felt a bit forced. It has its moments but played off a little over-the-top and didn’t work for me at times. But all that can be overlooked. As a whole, “Bumblebee” buzzes through pleasantly. Quite surprised how engaging and entertaining and how much fun this movie is.

In closing, THIS… is redeemable quality. THIS… isn’t the bloated, nonsensical, overkill of “WTF is going on?” mind-numbing crap we’ve been force-fed by Bay. THIS… is what I was expecting back in 2007 when the first, live-action TF was released 20 years after its animated version. THIS… is the movie that lives up to and gets the wheels rolling on a possible, respectable series with merit. “Bumblebee” has enough structure, story and heart to start from scratch. Well-balanced action, drama and humor allow this movie to be a wonderful experience and place the franchise on solid ground. Upgraded touches are visible and felt, but for the most part… Knight’s reboot-a-la-prequel is a symbol of love and respect for a heavy-hitting 80s franchise. 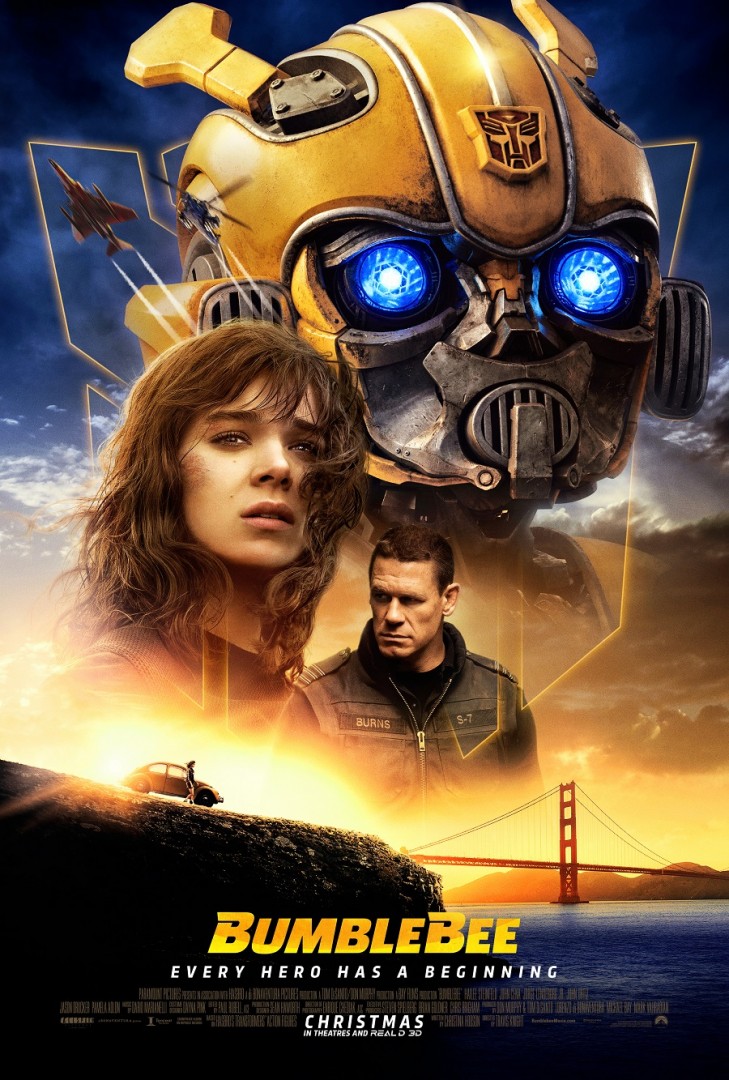