Quite frankly, most of you already know Iâ€™m not really a fan of gore. I mean, back in the day it had its moments, but it got a little long in the tooth. However, that doesnâ€™t mean I look down on it. It serves its purpose and when done right, hey, why not? Itâ€™s even more meaningful when one of your favorite directors is the one tackling it and has been successful at it. Before going through all its legalities prior to Blum House, THE GREEN INFERNO really struck a nerve with me. A good one! For starters, if thereâ€™s someone who can hash out a frowned-upon, sub-genre like cannibalism and make it morbidly appealing, itâ€™s Roth. Second and lastly, just reading the flickâ€™s press release and lengths Roth went to get this done is a reach beyond any other filmmaker I may know of. It takes a big set of cojones to go into the Peruvian Amazon and not only mingle, but get a real life tribal community to allow themselves to be part of a project so foreign to them, itâ€™s almost like us experiencing their world.

Howâ€™s that for some thought-provoking shit?

Back with a cynical vengeance, the man behind CABIN FEVER (’02) and HOSTEL (’06) has added another visceral piece to his collection of mind-blowing horror. Scratching that morbid itch, THE GREEN INFERNO follows the story of a group of young, gullible activists who trek all the way down to Peru from NYC to stage a protest and hold off a construction company from bulldozing and killing an innocent, indigent tribe. As shitty luck would have it, these kids bite off more than they can chew, finding themselves victims of uncivilized circumstance.

If your thing is well-shot horror with brutal results, it pleases me to say this is it! Inspired by other ghoulish flicks like CANNIBAL HOLOCAUST (â€˜80), INFERNO defines what our worst nightmares are made of.

Setting the tone for this piece are its characters. As usual, there are those you like and those you just grow to not give a fuck about. Getting into it would give too much away, but the common denominator here is Lorenza Izzo, who plays the role of JUSTINE. Balancing her performance, this young, gorgeous actress lends herself to strengths and vulnerabilities necessary for the piece. A lot of what makes her who she is oozes from desperation to survive an ordeal beyond any civilized person would encounter. The rest of the cast balance her out as well. To name a few, standing on opposite ends of the spectrum, Ariel Levy, Magda Apanowicz, Ignacia Allamand and SPY KID alum, Daryl Sabara (whose pot-head appeal in this piece is way beyond JUNI CORTEZ), complete the groupâ€™s puzzle of unpleasantry.

In true Roth manner, INFERNOâ€™s build-up is full of anticipation. Before it starts blossoming into chaos, the interaction between all characters juggles both frightening distrust and humor. Gradually balancing both, it seems to simmer a bit until its inevitable boiling point. And the good thing is if thereâ€™s anyone that can oddly tame oneâ€™s sanity with both horror and humor, itâ€™s Roth. At times some of its lewd humor seemed purposeful to run simultaneous to all the carnage, but there were a handful of unfortunate moments that deflated some of the tone and atmosphere. Not to an extent of total disappointment, but I did expect atrocities to outweigh a lot more than subtle chuckle.Â

On the opposite end of those who have black hearts, the intensity of horror here isnâ€™t for everyone. Those who may be a little lighthearted with flesh and blood (literally) may find themselves caught in a barfing bind. Not necessarily geared for the â€œcasual horror fanâ€ (whatever that means), INFERNO burns deep within oneâ€™s psyche as it taps into some shocking, disturbing, and plain old unwelcoming misfortunes Iâ€™m sure at some point, or another, someone in the real world has encountered. That being the deep, dark fears of being lost in a strange place, then found and held hostage by souls you cannot relate to or understand, and to make matters worseâ€¦ chopped up and eaten by them!

As a whole, THE GREEN INFERNO is an hour-and-forty-three minutes of an emotional roller-coaster. As it pays homage to a still tabooish genre, itâ€™s a guilty pleasure. A magical stand-out for this film is how it exposes the dangers of uncharted lands, but no matter how scary the natives may come off, we see and understand their day-to-day life with a surprising display of humanistic community. Children laughing, running and playing, the men doing the hunting and guarding, and women as care-takers. Therefore, not presenting an image of monsters, but simply beings doing what any one of us would do: defending home from outsiders who disturb. Onlyâ€¦ theyâ€™re keeping it real!

The gory gem that THE GREEN INFERNO turned out to be can be summed up in two words: fucking awesome! 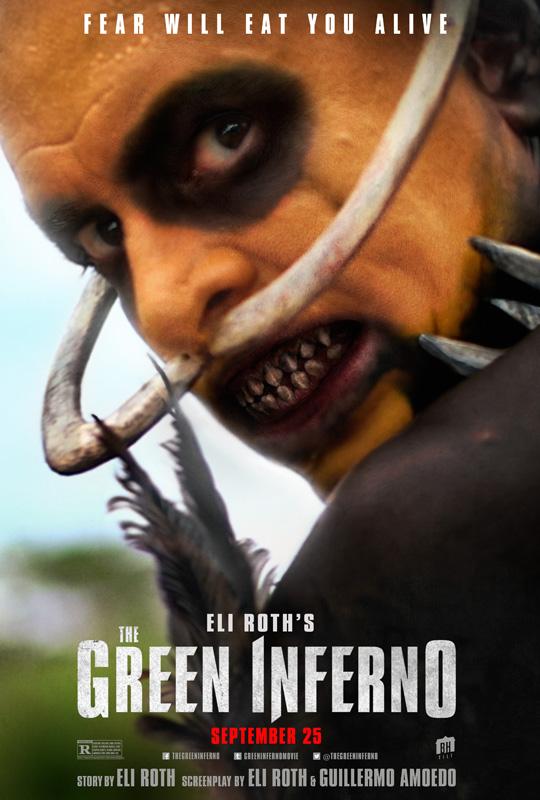