"The Messengers on the CW" 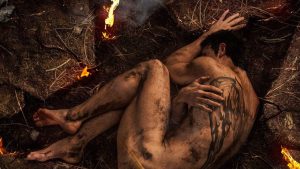 When a strange object crash lands in New Mexico, a shock wave is omitted that knocks out five strangers living in different states.Â  The shock wave was no ordinary thing and what it did was change the strangers who’ve unknowingly died and been brought back to life because they’ve been chosen to be the angels.Â  Come again?Â  Yes you read that right, I said angels and not just any kind of angels, butÂ the angels of the apocalypse.Â  What caused the shock wave was no strange item but the devil himself (The Bible and Son of God star Diogo Morgado) who has once again been casted out of heaven.Â  The Devil (or The Man as he’s referred to) sets out to assemble the four horsemen of the apocalypse and appears to the messengers in their darkest hour tempting each of them individually in an effort to prevent them from standing against him.

These modern day angels each have a unique gift that will aid them in their quest to thwart the impending Rapture.Â  Vera Buckley (One Tree alum Shantel VanSanten) a scientist from the NDSA (national deep space agency) is the most reluctant of the group (she’s an atheist and takes the longest to believe in what’s happening) can spirit walk (she can leave her body in a ghost like state allowing her to witness things) Â  Raul Garcia (J. D. Pardo from NBC’s Revolution) is a federal agent who acquires the ability to hear people’s thoughts.Â  Peter Moore (Joel Courtney) a troubled high school teenager is given the gift of incredible strength (he throws a guy across the way into the windshield of a car strong).Â  Erin Calder (Sofia Black-D’Elia) a young single mother with an abusive ex boyfrind that’s a cop receives the ability to heal (pretty handy having an on hand healer).Â  Joshua Silburn Jr. (Jon Fletcher) the son of a well known preacher who has taken after his father and risen in the religious world himself has prophetic visions (they come in the form of seizure like episodes where he sees images of events yet to come).Â  Guiding the group as the voice of reason is Rose Arvale (Anna Diop) with the gift of understanding and can speak every language known to man.

The Messengers debuted on April 17th and 20 days later on May 7th (a day before the fourth episode was aired) the show was canceled.Â  The Messengers wasn’t given the support a brand new series is supposed to get when a network hopes to attract and building viewership.Â  For starters there wasn’t a heavy promotion campaign which is the first sign that things are likely to go south.Â  When you are launching a new product you want it to be everywhere and seen by everyone so that regardless of where people go they will see the ads and keep the product on people’s minds.Â  More often then not people see something one too many times and decide to check something out just out of curiosity.Â  I don’t recall seeing any posters or billboards at bus stops or train stations here in New York advertising the series.Â  I believe I only got wind of the series from seeing promos during commercials of other shows on the The CW network or from other CW shows facebook pages mentioning the show.Â  Secondly the show was given the 9pm timeslot on Fridaynight and the was a BIG mistake.Â  Friday and Saturday in honesty are the two nights tv shows should NEVER air because those are the two nights people are less likely to tune in and more likely to hit the town (or the sheets) after a grueling work week.Â  Game shows and the news are the ONLY things that should be airing on those nights.

In addition to airing on a bad night, the show had no strong lead in show to help it gain viewership.Â  Being that The 100 ended it’s season on March 11th, the SMART play would’ve been to air Messengers in 100’s timeslot starting March 18th which would’ve paired it up with Arrow, The 100’s 8pm lead in show.Â  That move would’ve given Messengers a total of seven weeks of Arrow lead ins that fans of that series might’ve stuck around to watch Messengers.Â  Had that been the case those same fans quite possibly might’ve continued watching Messengers past next week when Arrow ends for the season finale on May 13th.Â  We’ll never know since the idiots that be chose the route they did instead of the route that should’ve been taken.

It’s a shame as this is the second series in a row to be canceled for two of the stars.Â  One Tree Hill’s Shantel VanSanten appeared last season on the show Fox series Gang Related (which was a GREAT show) which was canceled after it’s first season.Â  Luckily her character had been killed off before the season ended so she technically dodged that bullet, but only to end up getting the axe a year later with Messengers.Â  J.D. Pardo experianced similar loss when after two seasons his show Revolution got canceled by NBC.Â  Diogo Morgado on the other hand was riding a wave of success prior to The Messengers cancelation.Â  He played Jesus in the history making series The Bible then reprised the role for the movie Son of God.

DAMMIT I NEED to be calling the shots for network television cuz these mofos get paid millions and ALL the do is FUCK things up for people like me who are fans of a grear many number of shows both still airing and canceled.Â  Hell I still weep for Alias (my all time FAVORITE show) which brought Jennifer Garner (my FAVORITE actress who by chance I FINALLY got the pleasure of meeting, though brief, back in March and it was my OMG moment of 2015) into the Hollywood spotlight.Â  The Messengers, though canceled and unlikely to be rescued by another network, returns with epsiode #5 tonight at 9pm on The CW.