Radically redeeming himself from all other shitty flicks, Rock’s TOP FIVE is a solid piece of raw hilarity.

If you want something done right, you need to do it yourself. Written, directed and starring Chris Rock, this is definitely the piece that will grant him bragging rights. Itâ€™s no secret this man is a genius when it comes to stand-up. He has an untouchable style, swag that cannot be duplicated and humorous wisdom thatâ€™s pure platinum when it comes to interpreting the world. It is always a charm to watch this man do his thing. Heâ€™s so good, even as an interviewee itâ€™s fun to watch him. My question is during the last few years, where was all this magic when it came to selecting scripts? Ok, I may be going off on a bit of role-rage here because there are a handful of so-so films heâ€™s been in, but other than that, it always seems like heâ€™s muzzled. Heâ€™s been bamboozled into playing it safe for the masses. Was and/or is it good for Rock? Maybe for this bank account, but come onâ€¦sometimes you just have to say [fuck it] and let loose. Therefore, I conclude, thank God for TOP FIVE! He needed a narrative that would define him â€“ and he needed it bad!

TOP FIVE tells the story of NYC comedian-turned-film star Andre Allen (Chris Rock), whose unexpected encounter with a journalist (Rosario Dawson) forces him to confront the comedy career â€“ and the past â€“ that he’s left behind. 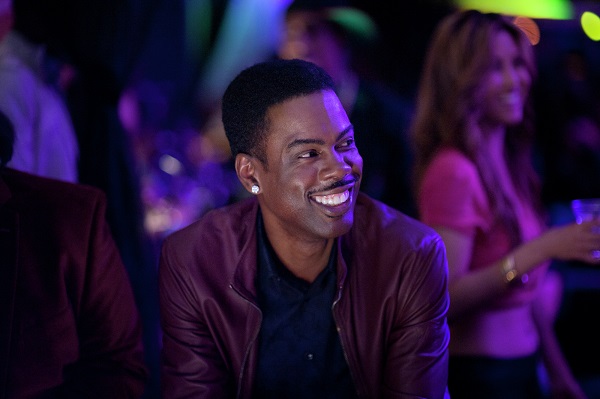 TOP FIVE is to Chris Rock as 8 MILE to Eminem, or MAGIC MIKE to Channing Tatum. Digging deep beneath the surface of show business, politics, hip-hop, and the reality of being black and famous in this era, Andre Allenâ€™s character is basically expressed in a way that Chris Rock has been expressing it since day one. Yes, the film can be a bit exaggerated (it is a film), but the elements of truth can be read between the lines as the film plays out in layers that brilliantly builds an arc. Itâ€™s got ups, downs, sadness, happiness, and itâ€™s all intertwined in a crafty, engaging way.

Truth be told, obviously itâ€™s the low-blow, raw, snappy comedy that stands out the most in TOP FIVE â€“ clearly not for the easily offended. From start to finish, itâ€™s unrelenting humor that pokes fun at everything and anything within its environment. Elevated by genius, unforgettable cameos, even during patches of drama the scriptâ€™s crafty display of dialog provides a good enough balance of empathy during core moments that lean towards relationships, personal matters, and addiction.

Chris Rockâ€™s ingenuity is smeared throughout the entire film, making it a breath of fresh air. Itâ€™s basically watching his stand-up, only in narrative form â€“ which to this day hasnâ€™t been done. Fingers crossed on the success of this film because much like this one, itâ€™d be great to see him take on other projects he controls. With great confidence from Paramount (for example), skyâ€™s the limit as to where Rockâ€™s level of comedic expertise can go upon other projects. One step at a time of course, so for nowâ€¦itâ€™s all about a brutally brilliant piece titled TOP FIVE!