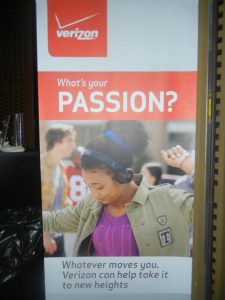 Verizon hosted an evening of entertainment for their Big Payoff event series at My Image Studios (MIST) in Harlem. The event was a part of Verizonâ€™s nationwide 2015 Potential of US city session program. The NYC session was primarily focused on digital technology, which included a panel discussion, meet and greet with R & B Soul Singer Melanie Fiona and live performances. Doors opened to the public at 6pm with the first 100 attendees receiving gold wristbands to meet Melanie Fiona. As we walked into MIST, we were greeted by Verizon event staff and checked in. All attendees received complimentary Verizon gifts {Bluetooth speaker, Bluetooth remote shutter & selfie sticks). Let me take a selfie! Comedian Jonathan Martin was the host of the evening.

The first part of the evening was the panel discussion led by Apprentice finalist and MSNBC commentator Kwame Jackson. He was joined by Essence Festival Live Events Coordinator, Michelle Nance; CEO & Founder of Mama Foundation of the Arts, Vy Higginsen; Founder & Publisher of Abernathy Magazine, Willie Jackson; CBS Network Coordinator, Noelle Llewellyn; Youtube LGBT Web Series â€œTriangleâ€ Cast Member, Ryan Cross; CEO & Founder of Katalyst Live, Haithem Elembaby; and Producer, Songwriter & Musician RoseGold. After Kwame introduced the panelists, they began the discussion with the influence of digital technology. Each of the panelists had different experiences and were very opinionated on this topic. Most had prior technical knowledge and skills in their career except Noelle. Noelle was from the old school and did not grow up on this form of technology. As her career advanced, she utilized different methods to market her brand. It was interesting to know that most of the panelists agreed that social media can be a gift and a curse. They discussed the importance of branding and knowing whatâ€™s best for you. Noelle said it best with pitching â€œyou get the best results when you pick up the phone.â€ Needless to say, we live in a society where most do not believe in calling, but rather texting. If we all had the mindset of a sales person, it would be a different game. The discussion ended with attendees asking questions and mostly seeking career advice.

Once the panel ended, those who had gold wristbands lined up to meet Miss Melanie Fiona aka my soul sister. Each person had the option to take an individual photo or group photo, if they attended with someone. All photos were taken with either our own phones or cameras. Melanie was down to earth as she goofed around and took selfies with her fans. After we took our photos, we were surprised with an autographed photo. Once the meet and greet wrapped up, some of the fans waited for Melanie to personally sign a CD or another memorabilia.

My favorite part of the evening was finally here. What we all waited for was about to kick off. Jonathan Martin returned to the stage to give a little stand up and introduced the opening act. Local Bronx Native R & B singer Vin Keatin was the opening performer. He performed a 10-15 minute set with original songs and R. Kelly/Avant cover songs. It was his first major performance and he gave us a taste of whatâ€™s to come from his forthcoming album. He did well for a first timer, but some of the crowd was not pleased and mostly texted or on social media. American Idol seventh season third place finalist Syesha Mercado was the next performer with an acoustic set. Her set was also about 10-15 minutes including original and cover songs. She recently wrote a song about Freddie Gray and performed it for the first time. It was heartfelt and emotional for Syesha due to the recent current events. She is truly talented and is becoming a household name. She sang her cover of BeyoncÃ©â€™s Love on Top, which sparked more than a million youtube views. Syesha also had the crowd laughing with her comedic side. While attempting to perform Natalie Coleâ€™s This will Be, she couldnâ€™t remember the words due to her Broadway show not singing the full length song. The crowd started the lyrics for her and then she finally belted it out. Once Syeshaâ€™s set ended, there was a brief intermission.

All hail Melanie Fiona! The R & B bombshell stepped on stage in all black with killer Louboutin boots. Melanie wasted no time with pumping up the crowd in her almost hour long set. She sang a slew of hits including Monday Morning, Wrong Side of a Love Song, 4am and new single Bite the Bullet. Backed up by her band, you can see why she is a 2x GRAMMY AWARD WINNER. Miss Melanie did not miss a beat as she sang her heart out and strutted her moves. It was a feel good vibe throughout every song. She made an announcement that she will be taking time off to focus on herself. Her forthcoming album is completed and she may pull a BeyoncÃ©, J Cole or Drake and release it without promotion. CANâ€™T WAIT! Thanks to Verizon for letting the people of NYC see whatâ€™s to come and putting together an unbelievable event.

Images from the Event