"What’s it like volunteering at Comic Con New York 2014" 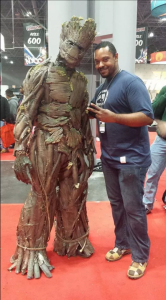 Comic Con is a place fanboys and fangirls, geeks and freaks, nerds and nerdettes, outcasts, comic book lovers, a slew of many types of people (even some men in drag) converge over the coarse of four days to embrace the genre.Â  New York Comic Con (or NYCC), now in it’s eighth year, is the LARGEST of such a gathering second ONLY to International Comic Con or SDCC (the MECCA of ALL Cons).Â  So what’s it like to be at Comic Con on the other side of the fence?

For starters being able to enter for FREE is probably the BIGGEST perk.Â  2014 Comic Con passes went for about $95 for a four day pass and $40-45 for single day passes.Â  Bypassing the general public lines and being allowed to enter 2-3 hours before doors open is a BLESSING!Â  It allows you a few hours to relax and get ready for the madness of the attendees.Â  It also gives you a chance to walk the grounds and see everything that’s there without the hordes of people in the way.

Companies tend to reach out to their volunteers early so if you know there are things you wanted to do (panels, autograph signings, screenings, etc) the vendors are pretty cool with allowing you time to do those things.Â  Just let them know when you give them your availability for each day.Â  Discounts and freebies from the company you are volunteering with is pretty cool.Â  They vary from company to company but you should atleast get something for free and a discount off whatever you plan to buy from them.

Once you’ve volunteered a few times, it’s experience you can put on your resume and is something that might help you stand out among other volunteers.Â  Though vendors AIM to get free work oit of people, they’re more inclined to hire seasoned people who they don’t have to babysit instead of newbies who don’t have a clue what to do.Â  Through networking it’s even possible to land a job, say with the company you’ve been volunteering with or another vendor you met at the con.

EXPECT to be on your feet ALL day so wear COMFORTABLE shoes.Â  Between working in your booth, helping customers and restocking shelves, it’s likely you’ll be sent to retrieve more product to bring to your booth so anticipate that you won’t have a moment to just sit and relax.

As a volunteer your badge will say exhibitor on it.Â  Many of the booths (like Marvel) will NOT allow you to line up for a chance at get into an autograph signing until after a certain time, but by then all passes/tickets have run out.Â  I guess if they didn’t do that then half the people already in the building would be lined up before the doors open and many attendees wouldn’t be able to attend.Â  They should have an exhibitor only signings to allow those working at thr con a chance to meet some of their Marvel favorites.

On average companies provide their volunteers with lunch and (if they’re smart) have a cooler stocked with drinks to keep everyone hydrated throughout the day.Â  Once the day is over and whatever work has been completed it’s “thanks for the help and see you tomorrow” so don’t expect to be fed dinner (unless your vendor is REALLY nice).