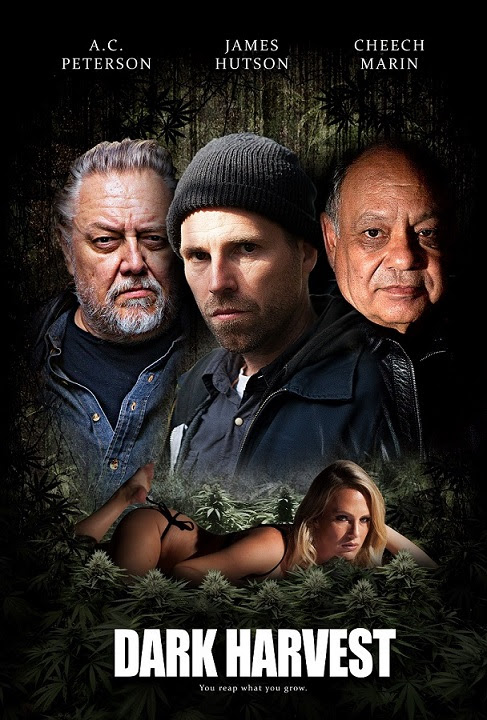 Dark Harvest is Cheech Marin’s first cannabis movie since Still Smokin, his final Cheech and Chong film in 1983.  The new movie will be available on all digital platforms on January 9.

In addition to Marin, who was recently hired by California as the perfect pitchman to help enroll cannabis businesses into the state system, the film stars James Hutson, A.C. Peterson, Tygh Runyan and Hugh Dillon.  Dark Harvest is written and directed by James Hutson.  The producers are James Hutson, Marc Petey, P. Lynn Johnson and Tim Laplante.  The executive producer is Seth Willenson.

Dark Harvest chronicles the struggles of two growers and a suspended narcotics officer as they deal with a series of murders on the eve of marijuana legalization. The film is a gripping independent vision full of revelations as the two race to find the killer in this action thriller.

Dark Harvest is the first directorial effort of actor James Hutson.  A protege of Ben Kingsley, Hutson studied at the British American Drama Academy in Oxford, England.  Under Kingsley’s direction, he played Vladimir in Waiting For Godot. The veteran actor has played roles ranging from Richard III to American Buffalo‘s ‘Teach’.  Hutson’s film career launched after being a ‘reader’ during casting for Insomnia and Reindeer Games where directors John Frankenheimer and Chris Nolan cast Hutson, and hired him for rehearsal sessions with Al Pacino, Robin Williams, Charlize Theron and Ben Affleck.  Hutson is a veteran of the cannabis industry, which lends a strong sense of authenticity to Dark Harvest taking you behind the scenes.

Cheech and Chong met in Vancouver, the setting for Dark Harvest, in the 1970’s and launched their comedy career with the iconic smash hit Up in Smoke.

Dark Harvest was featured at the New York Cannabis Festival winning both best film and best actor awards, the Cannabis Film Festival in Colorado and a special screening at the High Times Cannabis Cup Festival in Las Vegas.