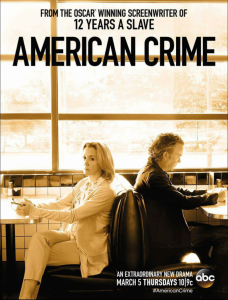 Imagine being woken up in the middle of the night by a phone call and it’s the police on the other end.Â  They’ve called to tell you that your child has been killed.Â  A parent’s WORST nightmare.Â  Over the coarse of the first season viewers will witness the unraveling of the mystery surrounding that death as well as being introduced to charcaters who’s lives will intertwine (in one way or another) relating to the crime. That phone call is what starts off American Crime, a new drama series from the BRILLIANT mind of John Ridley, the academy award winning screenwriter of the critically acclaimed movie 12 years a slave.

The series is led by Oscar winner Timothy Hutton (Ordinary People) as Rusd Skoke and Emmy winner Felicity Huffman (Desperate Housewives) as Barb Hanlan, the parents of the victim.Â  Huffman displays a new layer of her talent as she plays someone who Despite the circumstances of how we meet Barb, she comes off as unlikable and through the pain of her loss shows an ignorance that will rub you the wrong way.Â  This character shows a new layer of Huffman’s talent (who’s usually one of the likeable people in whatever project shes in) as it’s a 360Â° turn from her Desperate Housewives character.Â  As Russ I feel Hutton will show the masses that he still has it when it comes to acting.Â  There’s a scene in particular where Russ must identify his son’s body that’s so sad and after taking a moment to let the pain sink in, his reaction is so heartbreaking and showcases the vulnerability of this character which will make you want to go out and help find his son’s killer.

By end of the first episode we discover there is more to the crime then just it being a murder and more questions then answers will be raised.Â  What really stuck out most to me (aside from the exceptional acting of the cast) was the visualization of the series.Â  It doesn’t look or come off like a scripted drama series, but rather real life events and real people with real problems that unfold as a camera just happens to be there to capture it all.Â  It’s the new wave of television, this isn’t a drama series or a documentary but a docudrama blending fiction with the look and feel of real life.Â  If the network is smart, this series will be renewed for season two and audiences will continue to see the power of this amazing show and the complexity of it’s well written and acted characters.Â  The series premiere of American Crime debuts tonight at 10pm following an all new episode of Scandal.