“This is as close to hell as I want to get.” – Lorraine Warren (THE CONJURING 2)

According to my press notes, on September 21, 2015 at precisely 6:45am (15 minutes prior to principal photography on THE CONJURING 2), Fr. Steven Sanchez of Albuquerque, NM (a Roman Catholic Church sanctioned exorcist and personal friend of Demonologist Lorraine Warren) began a blessing of the production before cast and crew at Warner Brothers Studios in Burbank. (Gulp!) How’s that for a rattle in your pants? Seeing as the master of psychological fright was helming another project about horrid experiences, it had to be done – and with good reason, too. Whenever James’ eerie cinematic breeze blows through your hair… Know you’ve been Wan’ded!

After granting himself a seat at the “Masters of Horror” table with the now popular SAW and INSIDIOUS franchises, director James Wan set out on darker horizons. Based on “true events,” in 1970, Demonologists Ed and Lorraine Warren battled a vicious, supernatural presence that haunted a remote farmhouse in Harrisville, RI – a case brought to the screen in 2013 with his highly praised and financial success THE CONJURING. After that came the most intense and publicized case of their career, Amityville, NY. A case that would nearly destroy them.

Three years later, they’re back! (On screen of course) At it again, Wan seeks to terrify moviegoers with his depiction of another highly publicized case involving the “real-life” horrors experienced by Ed (Patrick Wilson) and Lorraine (Vera Farmiga) Warren with THE CONJURING 2! It’s 1977 when, with the effect of Long Island still haunting them, the Warrens come out of a self-imposed sabbatical and travel to northern London to take on a vile demonic entity that has taken root in the home of the Hodgson family, in the borough of Enfield.

Your shit… Do you enjoy having it scared out of you? If your answer’s “yes,” look no further. With just as much psychological edge, creepiness and elevated mind-twisting scares as the first, this is one sequel that gives its predecessor a run for its money. Wan really knows how to kidnap your attention. How to have you grip on to your soul. The arc he provides in all of his set-pieces is something modern horror/thriller films lack, and although much like the first, THE CONJURING 2 isn’t really providing anything “new” per se, what it does give us is a bone-chilling narrative with everything you want and/or need in a fright flick.

Horror clichés and periodic slow-burns aside, THE CONJURING 2 hones its terrorizing talent by keeping you engaged and fairly empathetic for all the emotional, mental and physical abuse brought upon a single mom (Frances O’Connor) and her 4 children. Particularly one, Janet (Madison Wolfe), who bares the blunt force of an evil, supernatural existence. Unlike the first which has a simpler story to follow. A terrifying one note. THE CONJURING 2 tends to be harsher ’cause Ed and Lorraine are juggling the effects of a recent case, reluctantly jumping into another, while all along handling their own personal demon. A stand out strength for this one also is that it’s a totally different movie. There wasn’t an act in this story that felt like it was retreading old grounds. The film pushes itself to do something different, while still giving off that flair of fright audiences really enjoyed the first time around.

As a whole, THE CONJURING 2 runs on complex possession of souls. Fast-paced and bizarre, the film delivers more. It’ll give those with blackened hearts a lot to chew on, while inevitable haters more to hate on. Clearly a franchise at this point, I still feel someone’s gotta spin the wheel and look into producing short films of all artifacts held in that room of terrifying toys, which we get a glimpse of again. Title it CONJURING CHRONICLES and set off on a spooky sail into the unknown. We did get ANNABELLE, but considering box office success, it really wasn’t what we wanted. (The doll’s origin story offered in THE CONJURING.) Oh, well. All a fantasy, but if there’s a producer out there with some clout that can get this rolling, I want in. Literally! Until then, I strongly recommend THE CONJURING 2 if you’re the type who enjoys a good scare. 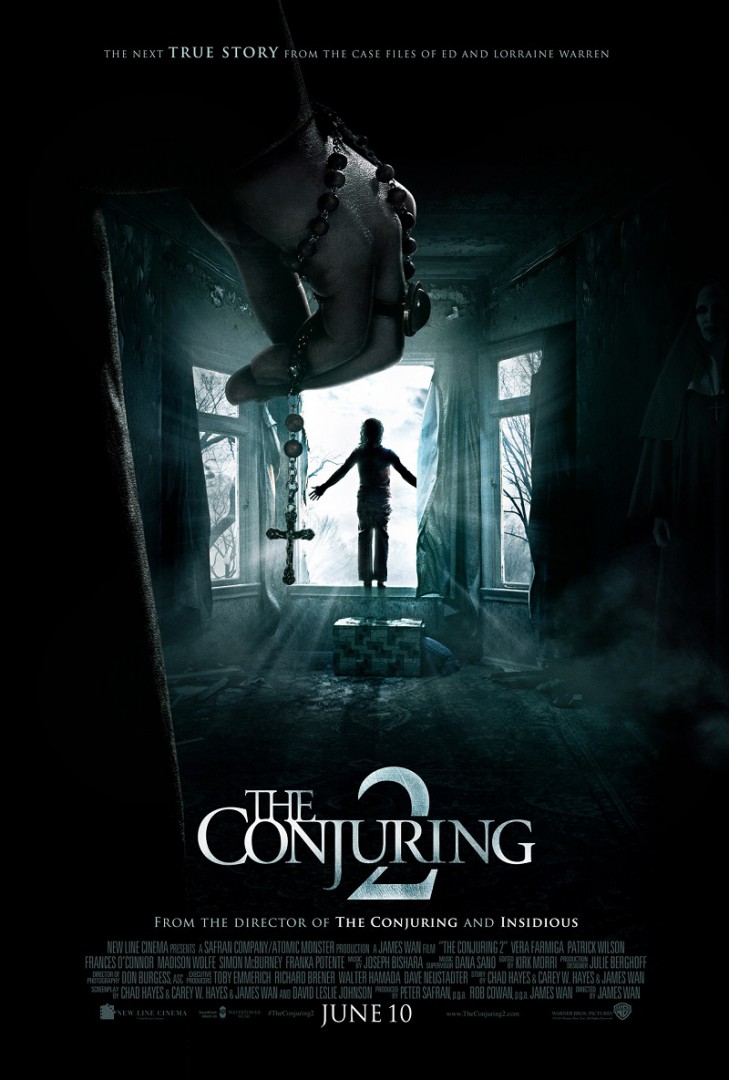