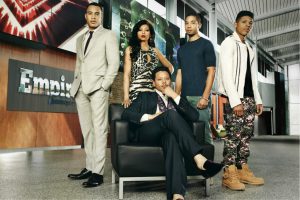 Still feeling that Wednesday night drought that has been felt since the season finale of Empire?Â  Me TOO!Â  Wednesday’s just haven’t been the same.Â  All the episodes are available on various formats like itunes and amazon or if you’re old OLD school you taped every epsiode.Â  Plus I’m sure there are websites that have them available for download.Â  And let’s NOT forget that the DOPE soundtrack (which debuted at #1 on the charts has been holding steady at #2 for the last two weeks) is available for purchase.

The cd format features 11 tracks like the confessional Good Enough by Jamal (Jussie Smollett), What is love (the FIRST song heard on the show) byÂ Veronika (V. Bozeman) and the club popping duet Keep it movin’ by Tiana (Serayah McNeil) and Hakeem (Bryshere “Yazz” Gray).Â  The deluxe version (only available in digital format) features 18 tracks like the hip hop monster Drip Drop by HakeemÂ  (Bryshere “Yazz” Gray), the funky smooth ass shaker You’re so beautiful by Jamal (Jussie Smollett) and HakeemÂ  (Bryshere “Yazz” Gray) and the defiant Keep your money by JamalÂ  (Jussie Smollett).Â  Don’t forget that pretty much every song heard on the show has been recorded and made available for purchase so if that song you loving is not on either version of the soundtrack you can STILL buy it for your musical pleasure.

Now that we’ve got that out the way, what exactly can we look forward to when Empire returns for it’s second season?Â  We do know that Oprah and Common have been confirmed to appear, though their roles have yet to be announced.Â  We also know that the powers that be are hoping to land two time academy award winner Denzel Washington.Â  Just off the names alone I’m already like YES and DAMN!Â  But who would they even play?

I simplest scenario would be that Common would appear as himself.Â  Playing himself would further the relationships the shows characters have with people/artist/celebs in the real world.Â  That make the most sense, but one never knows and since Common has been building his acting career of late, his role could be a surprising one.Â  Now who would Oprah and (should he appear) Denzel Washington play?Â  Corprate or industry big wigs?Â  They both exude money and power and though neither allows their wealth to dictate who they are, it would make for good tv seeing them act like money hungry versions of themselves.Â  Perhaps the parents of Lucious or Cookie?Â  I mean it’s possible and would be QUITE the sight seeing Denzel and Oprah as middle aged hoodrats.Â  Denzel could certainly pull from his training day character while Oprah would show a new side of her acting capabilities.Â  We’ll just have to wait and see. 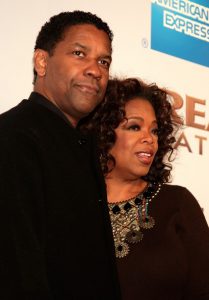 What do you think lies ahead?Â  Well we know Lucious is going to get out at some point.Â  I mean HOW could the drama continue if he’s locked away?Â  Since Vernon is missing (and dead) the feds no longer have their star witness to testify against Lucious so they’re going to have to let him go.Â  When that man gets out he’s most assuredly bringing the wrath of hell down upon everyone…except Jamal (who seems to be the only friend he’s got left).Â  I suspect the bond between father and son will continue to grow and Lucious will take advantage, but to what extent?Â  Speaking of Jamal his relationship with Ryan will continue to heat up and I suspect they’ll be the “it” gay couple on the scene.Â  Now that he’s running Empire will Jamal be able to keep control of the company?Â  Dre, Hakeem, Cookie and Anika are working together to take control of it after all.Â  That’s a theory I’m not sure about, it could go either way so I’ll leave that up in the air.

Wouldn’t it be crazy if Anika was pregnant?Â  We’ve already got one baby Lyon on the way (Rhonda is pregnant with Dre’s child), but wouldn’t it be something if she too was with child?Â  What better way to fully stick it to Lucious (and Cookie given their history) then to be pregnant with Hakeem’s baby?Â  It gives her more reason to stick around aside from being back to work at Empire.Â  It would make for some EXTRA JUICY DRAMA!Â  Speaking of Hakeem I HOPE we continue to see him mature.Â  The first season he was a SPOILED little bastard but season’s end he seemed to come into his own and be the man his parents had always hoped he would be.

What ideas/thoughts predictions do you have about the upcoming season?Â  By all means feel FREE to post them.Â  I’m curious to see what all of you think could happen.Â  Somebody is bound to be right, could it be you?Â  We’ll keep you posted as to when season two is expected to air but something tells me Fox might just make us wait until the new year.Â  Why?Â  Empire’s meteoroc rise was UNPRECEDENTED to say the least and they will do EVERYTHING in their power to ensure that it STAYS a success.Â  Now we as fans DON’T want to wait and want MORE asap but time may he EXACTLY what the show runner’s need.Â Â  It will allow them to really map out the season and infuse it with the the same energy (if not more) because NOW the pressure is ON for them to come back and DELIVER so don’t be surprised it an announcement over the summer is made that the show won’t be back until January.Â  You’ve be warned.Â  LMFAO.Â  #CorrienteNation be good!