"Review: The Age of Adaline"

If you could create the quintessential woman, what would be the ingredients you would use?Â  How aboutÂ  the elegance and poise of Audrey Hepburn?Â  What about the sophistication of Michelle Obama?Â  The glamour of the one and only Rita Hayworth?Â  We can’t forget a heart full of compassion like Oprah.Â  Now throw them into a pot, mix them altogether and pour then into the body of a beauty like no other and you have Adaline Bowman.Â  Born in 1908 Adaline had it all, she was young and beautiful and married for love.Â  That love produced a daughter who she named Flemming.Â  Adaline would learn a short time after that death would come knocking at her door as her husband would be killed in a freak accident.

At the age of 29 Adaline herself was in a freak accident (car accident) and she too would die, but fate had other plans for her and she was miraculously brought back to life.Â  Years later she would learn that the accident had given her an unexpected gift and curse…Adaline was immune to the aging process.Â  You see the night of her accident something happened to her body and from the moment she drew breath again she stopped aging.Â  Isn’t that one of the many dreams most women have, aside from marriage and motherhood is to be young and beautiful forever?Â  So why would her gift also be a curse you ask?Â  Because while Adaline remained untouched by time, everyone and everything around her wasn’t including her daughter who she loved most.Â  What’s worse is that people (including local law enforcement and the government) began to take notice so Adaline did the only thing she could do and that was to run.Â  And RUN she did, 60 plus years of it.Â  How sad and exhausting a life that must’ve been, not forming attachments (aside from the relationship with her daughter who she kept her distance from in order to protect her) and never staying in one place for too long.

Gossip Girl alum Blake Lively stars as the ageless Adaline and I think was a great choice for the role.Â  I HOPE the film does well because although Lively is a celebrity and paparazzi favorite, I always got the sense that she was never taken seriously as actress.Â Â  This film may be the one that allows movie goers and Hollywood to look at Blake beyond her beauty and see her as a serious actress.Â  Game of Thrones actor Michiel Huisman (Daario Nahari) plays Ellis, a man in our current time who manages to get through to the closed off beauty and opens her mind and heart to the possibilities of love.Â  Though I don’t find Huisman as attractive as many of his female fans do, he does possess a charm and strength about him that makes him appealing.Â  Any man that can muster up the courage to go after a gorgeous woman of that magnitude (wait until you see the scene where they first meet) gets my respect.Â  Blake and Michiel had good chemistry and they looked believable as a couple.Â  Harrison Ford is the surprise of the film because upon seeing Adaline it’s obvious they know each other, but there’s a twist that gets revealed that isn’t in the trailers which complicates things for Adaline.Â  That twist will make her question if she made a mistake and should run again or if she stay and stop running.Â  Oscar winner Ellen Burstyn (Alice Doesn’t Live Here Anymore) adorable as Adaline’s daughter Flemming and it was funny yet bittersweet watching Lively play mother to Burstyn 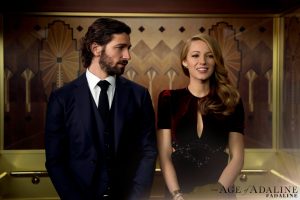 Overall I thought the film was pretty good despite that it fell short of what I thought it would be, the next great love story romance since The Notebook, but regardless I still enjoyed it.Â  The concept of what happened to Adaline from the accident was very interesting and it makes one question whether they’d have the courage to make the the same choices she makes or if you would do things differently.Â  It was also refreshing having a fairy tale movie made for adults because I think as we get older we let go of the fantasy and forget that despite being adults we still have dreams we wish could be real.Â  There were only two real call outs I had about the film.Â  The first was the narration, though helpful in setting up the film and introducing the audience to Adaline and her story, it was cheesy and unnecessary towards the end of and should’ve been cut from the movie.Â  The other call out was how the film ended, it was simple and touching in my opinion, but I would’ve liked to have seen more.Â  Whether it would’ve been a series of flashes showing how her life went after the final moment in the film or a few paragraphs on the screen summing up how things went for her for me would’ve been nice as oppossed to being left with your own conclusions as to how things went.Â  If you like dramas and are a sucker for love stories then you will enjoy this film.Â  The Age of Adaline is in theaters everywhere today.